When the Arizona was hit it was personal for Roosevelt, he helped lay the keel for the Arizona.

It’s kind of personal for me as well. As a child growing up in Hawaii we visited the Arizona Memorial many times. It was the place to go when people from the mainland came to visit us.

(With family friends at the Arizona Memorial entrance early 70’s)

At the time though it had little meaning for me.  I heard it many times when we visited the Arizona. As we stood in the memorial, under us was a sunken ship. It was bombed during an attack 20 years before I was born. In fact it was really, really…boring. Although the boat ride out to the memorial was pretty cool. 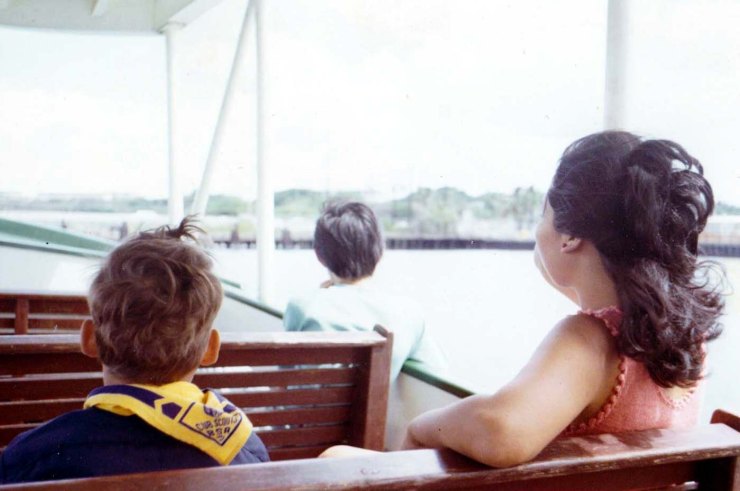 But once there…you couldn’t run around. No yelling or loud talking. You looked out over the sides and there was nothing to look at except rusty metal sticking up out of the water.  And the water…it looked muddy and dirty with oil floating around the area. For an eight year old kid… zzzzzzzzzzzzz.

(Looking forward in the Memorial 1971)

But I remember something that caught my eye that fascinated me for some reason. I’m not sure that “fascinated” is the right word to use but it got me thinking. As I looked over the edge of the memorial towards the remains of the forward gun turret that sticks out of the water you can partially see down in it. I remember standing up on the ledge of the memorial where I saw what looked like a light blue piece of cloth flapping in the wind. I didn’t understand at the time why it caught my eye and interest. I know I thought what a weird place it was for something like that to be.

As an adult, and specifically because I served 20 years in the Navy myself, Pearl Harbor and the Arizona had a totally different meaning. I learned more about the attacks of December 7th and the lives that were lost. In fact I am an avid reader of WWII history and especially the attacks on Pearl Harbor. I’ve spent countless hours watching documentaries of the attacks over the years. And then I remember that strip of cloth. It made more sense to me what it was having worn the light blue shirt of the everyday Navy uniform like they did back during WWII.

Now when at the memorial I no longer need to stand on the ledge to see the inside of the turret. The strip of cloth though is no longer there. Perhaps taken by a bird for a nest or blown away by the wind. But I remember it and wonder. Was it from the shirt of someone who was on board and in the turret at the time of the attack? Did he manage to escape and tore his shirt? Or was it from someone who never made it out and is one of the 1177 sailors who were entombed in the Arizona on the day of the attack. Did he get the chance to tell his story?

In my visits to Pearl Harbor I loved the opportunity to meet and talk to some of the survivors, especially those of the Arizona. Sadly that opportunity dwindles with each passing year. Those who survived, they got the chance to tell their stories. Not all wanted to, I understand that. It was a painful time. But the chance was there. Those that did, I listened to closely.

My wonderment was for the ones that did not. The ones who rest with their ship at the bottom of Pearl Harbor. The opportunity was taken away from them. Oh the stories they could tell had they had the chance. It, believe it or not, haunts me. The stories, the memories, the experiences. So much more than lives were lost on December 7th 1941.  But for me, they will never be forgotten.

It was for those reasons that I wrote my first book, ‘Tales From My Sea Bag’.

As I sat and wrote, so many memories of my time on the Trenton flowed in. “Tales From My Sea Bag’ turned out to be a bigger project than I had originally intended. As it was it became 371 pages of memories and could easily have been more. I had to stop at some point before it turned into another book the size of “War and Peace.’

One of the biggest things I thought about as I wrote that became a constant thought was how the Trenton is no longer in service. She belongs to the Indian Navy now. Her memories are now being written under another name, the INS Jalashwa by another country. And the memories of her service and those who served on her in the U.S. Navy from 1971 to 2007 are slowly slipping away. I didn’t want that to happen. Thus, ‘Tales From My Sea Bag’ was born.

I am at it again, yes I’m writing. It has taken me a while to get back into a writing frame of mind. My oldest son who is a writer himself reminded me that once you publish, you need to get moving with the next project. That’s what writers do. Onward mush!!!

For this new project, a continuation of memories from the Trenton, I again reached out to some of my shipmates that I am still in touch with. I had hoped to include more stories but from different people who served with me. Sadly my requests only spawned sarcastic answers of why they couldn’t participate. Some said they simply didn’t remember anything. Some said their stories were not something they wanted told because of their behavior. Some just completely blew off the request. OK, no worries guys. Trenton will live on in my memories, in my stories.

Fortunately all was not lost. So far one of the guys from “Tales From My Sea Bag’, Ed will make a return appearance with his stories and humor. I’m also hoping Jack will make another appearance as well. So far we are back underway with several stories already written with more to come. A title for this next project is not as yet known…But I will come up with something.

As I work on this new project, you can still get ‘Tales From My Sea Bag’ at https://navywriter680.com/now-available/

By the way, I have to mention…I received a review about ‘Tales From My Sea Bag’ from a lady (I use the term lightly) who said (and I quote), “The stories were incredibly embellished.” I am amazed at how people are willingly wanting to show their ignorance and disrespect to the world. Lady, if you felt my stories were embellished, you clearly don’t know anything about, or anyone in the military. Tell that to our Pearl Harbor survivors I mentioned above. Tell that to our WWII, Korean and Vietnam Vets. Tell that to those who are currently out in the field and out to sea every day. Tell that to those who have lost limbs and suffer from PTSD.

If you think my stories are embellished? Well…I can only imagine.

1 thought on “The U.S.S. Arizona Memorial and Why I Wrote My First Book”